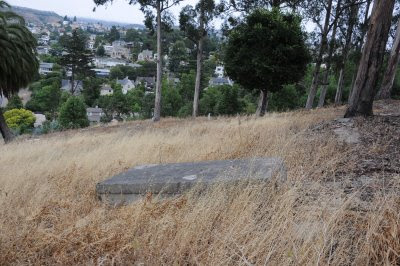 Jackie Robinson. Franklin Raines. Barack Obama. Sidney Poitier. Arthur Ashe. These are all black men who we know were the first to break the color barrier in their respective fields. However, does anyone remember Washington Oglesby today?

In 1896, Oglesby was the first black man to be admitted to the California Bar Association. However, today he is completely forgotten and buried under a bunch of dried out weeds in the unendowed section of Mountain View Cemetery. I searched for an hour and couldn’t find his grave. Most of the gravestones are either damaged beyond recognition or are too overrun with weeds or covered with dirt to locate. It’s a sad ending for a man who was truly a trailblazer in the closing years of the 19th century. [UPDATE: The weeds have been cleared and the unendowed area in being restored].

Oglesby was born and raised in Virginia. He came to California around 1890 from Arkansas, where he was teaching school. Upon arriving in Oakland, he began selling real estate. His home was at 8th & Linden in Oakland. Directories from the late 19th century show him working in real estate, but the 1902 Husted's Oakland City Directory has him working as an attorney at 861 Broadway in Oakland.

He was involved with the Populist Party (also known as the People’s Party), whose national platform was getting rid of the gold standard. However, many Southern Populists, including their Presidential candidate Thomas E. Watson, spoke about whites and blacks getting past their racial differences and focusing on issues where they had economic self-interest. Oglesby ran for Justice of the Peace on the Populist ticket, but lost.

After passing the California Bar, one of Oglesby’s first divorce cases he handled was for a white woman named Elise Burkert. Her husband in the East had abandoned the woman and her two children. Oglesbly not only won the case, but he won a bride and raised the children as his own.

Oglesby died of a “weak heart” at the early age of 43. His wife said that she heard him call out her name at 3 AM, she flipped on the light and saw him breathe his last breath.

According to the California Association of Black Lawyers, there are over 2,600 black lawyers in the state today. Hopefully, the story of Washington Oglesby will become better known as he helped pave the path for generations of black lawyers.
Posted by Michael at 2:49 PM