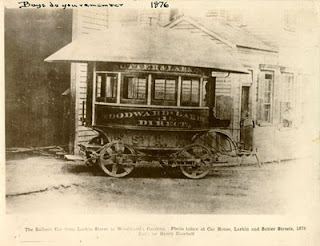 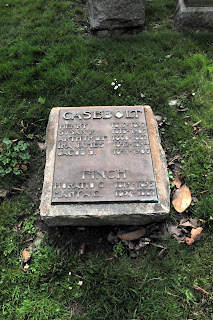 Henry Casebolt (1816-1892) was born in Virginia, but came to California in 1851, probably in search of gold. He may have worked first as a blacksmith, but soon was building houses, carriages and eventually railway cars.

About 1857, Casebolt formed a partnership with Charles Van Gulpen [sic], an immigrant from Prussia, who had come to California in 1850, probably also in search of gold. They built omnibuses (oversize carriages to haul groups of people) and built the first horse cars for the Market Street Railway, the first street car line in California.

[There is some evidence that Casebolt and Van Gulpin parted ways about 1863, and that the business thereafter was Henry Casebolt & Company]

It is unclear whether it was the partnership, or Casebolt personally, that was the contractor for the Front Ocean & Mission Railroad in 1866. But it is clear that it was Casebolt that became the principal owner of this railroad (later the Sutter Street Railroad Company) when its promoters paid him in railroad notes and then defaulted. Casebolt & Van Gulpin built the cars for this line.

It was for this horse-powered line that Casebolt invented the “balloon car,” characterized by its oval outline (see image below). The body of this car pivoted on the undercarriage so the direction of the car could be reversed by simply removing a retaining pin and directing the horses in a semi-circle to rotate the body on the undercarriage. These cars operated on Larkin Street, between Ninth and Mission, and Mission to Fourteenth Streets, which was the entrance to Woodward Gardens.

But with time, the pivot mechanism would wear heavily, the body of the car become wobbly, and passengers begin to get seasick. Further, the lightly constructed cars had a habit of jumping the track. Needless to say, they were not popular. (It is interesting to note that Casebolt claimed to have “invented” the pivoting car, but John Stephenson had obtained a patent for a braking system for a pivoting car back in 1859, the wording of which seems to take for granted that such cars already existed.)

In 1876, Casebolt decided to power the Sutter Street line by cable. Unwilling to pay the license fee Andrew Hallidie wanted for use of his patented cable grip, Casebolt invented his own with the help of engineer Asa Hovey. Casebolt and Hovey’s side grip with lever control was better than the Hallidie wheel-operated bottom grip, and became the most common kind of grip in the cable traction industry. It is unclear whether the new cable cars were built in the railroad’s shops or by Casebolt & Van Gulpin, but the conventional wisdom is that later cars were built in the railroad’s shops, and the partnership was apparently dissolved.

Casebolt sold his interest in the Sutter Street line early in 1880. The U.S. Census for that year—official date June 1—shows his occupation as “money broker.”

In the mid to late 1880s, Casebolt built an experimental railway at Emeryville, California, to demonstrate the use of an overhead cable. The car would run on rails like an ordinary cable car, but the cable—rather than running in a raceway under the street—would run through pulleys supported on poles somewhat similar to those supporting an electric trolley wire. The idea was to avoid the inconvenience and expense of tearing up streets to install the cable underground. Little is known about this experiment, but it obviously was not a commercial success.