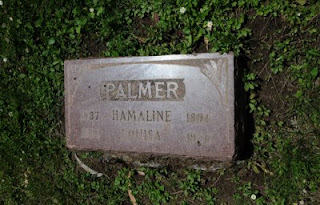 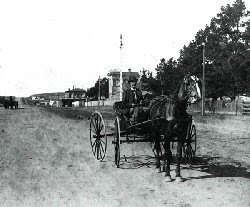 [Photo of Hameline Palmer grave by Michael Colbruno; photo of Point Lobos Road as it looked when Palmer lived]

Hameline Palmer was known as “Bendigo” and ruled the gypsies on the Pacific Coast. He led a nomadic pack of horse traders and peddlers up and down the coast, camping out in tents along the way. Newspaper accounts describe him as “portly” and holding autonomous sway over his camps.

He was born in England and raised an Episcopalian, like most gypsies who emigrated from the British Isles. It is unclear where the nickname Bendigo came from, but it’s a small town in Australia where a number of Palmers reside. Palmer made his headquarters in Oakland and was well-known to those in the livestock trade. He also owned real estate in the City, but most gypsy wealth came from their ownership in gold.

He died at a gypsy compound near 5th Avenue and Point Lobos Road (now Geary Blvd.) in San Francisco of natural causes. It was reported that a “pageant” of gypsies followed the corpse to Oakland’s Mountain View Cemetery. His last rites were performed by Father Akerly, an Episcopalian priest, in front of fifty gypsies.

Read more about the gypsies at Mountain View Cemetery at: http://mountainviewpeople.blogspot.com/2008/03/samson-palmer-and-aaron-boswell-king-of.html

Michael, do you have any information about Rev. Benjamin Akerly, pioneer Episcopal cleric of the Bay Area, who performed the dedication of Mountain View Cemetery in 1863/64 and officiated hundreds of its burials? Specifically, I'm looking for the location of his grave and memorial in Mountain View.