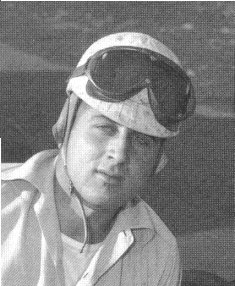 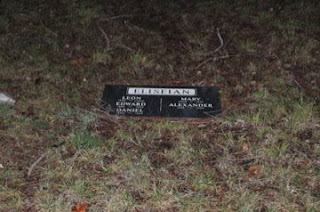 [Elisian photo from Find a Grave; Photo of grave by Michael Colbruno]

Elisian was a race car driver known as an aggressive competitor whose style reminded many of his friend and idol, Bill Vukovich, Sr. During the 1955 Indianapolis 500, Elisian pulled his car off the track and ran to the site of Vukovich's accident. This earned him praise from the racing community, but it earned him the wrath of the car owner.

Elisian qualified for the position in the middle of the front row of the 1958 500 Classic. In a heated first lap duel with pole sitter Dick Rathmann, Elisian lost control attempting a pass in the third turn and triggered a multi-car accident that resulted in the death of popular driver Pat O'Connor. Elisian received a suspension for this, although he was reinstated days later.

After missing the 1959 Indianapolis 500, Elisian was tragically killed in a fiery accident during the 1959 Milwaukee 200 championship car race. The car in which he lost his life, "The Travelon Trailer Special," was rebuilt and propelled Jim Hurtubise to the status of fastest qualifier and Rookie-of-the-Year for the 1960 Indianapolis 500.

Elisian is buried with his parents and 2 brothers in a family plot under his original family name.