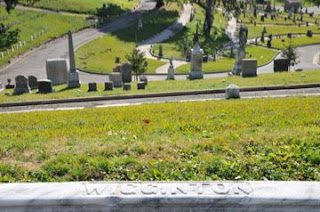 [Photo of gravesite by Michael Colbruno]

Peter Dinwiddie Wigginton was born in Springfield, Illinois on September 6, 1839. He moved to Wisconsin with his parents in 1843 and attended the University of Wisconsin at Madison. He was admitted to the Wisconsin Bar in 1859 and practiced law.

He served as the editor of the Dodgeville (Wis.) Advocate.

In 1862, Wigginton moved to Snelling, California in Merced County, where he practiced law. He served as the district attorney of Merced County from 1864-1868. While living in Merced, he co-owned the Merced Woolen Mills Company and married the former Sallie E. Moore.

He was elected as a Democrat to Congress in 1875. In the 1878 election, he beat former Governor Romualdo Pacheco by a single vote.

In 1880 he settled in San Francisco and resumed the practice of law, representing the Southern Pacific Railroad. In an attempt to revive his failing political fortunes, he became involved in forming the American Party, which railed against foreigners entering U.S. soil. The party had minor success recruiting working class men and some white-collar employees.

In 1886, he ran as the American Party candidate for Governor of California, losing to Mountain View Cemetery denizens Washington Bartlett (Dem.) and Jonathan F. Swift (Rep.). Two years later he was nominated by the American Party as their candidate for Vice President. He ran with James Curtis of New York and received only 1,591 votes nationwide. The party platform advocated a fourteen-year residence for naturalization; the exclusion of socialists, anarchists, and other supposedly dangerous persons; free schools; a strong navy and coastal defense; continued separation of church and state; and enforcement of the Monroe Doctrine.