"The Fates" at the Main Mausoleum 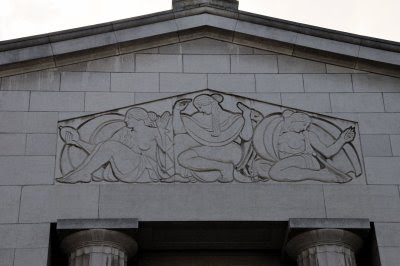 [Photo of the Moirae by Michael Colbruno; Text excerpted from Wikipedia]

Take a walk down the main road of Mountain View Cemetery and stop at the entrance to the main mausoleum and look up. You will find this beautiful relief of the three fates from Greek mythology.

The Moirae, also known as the "apportioners" or “The Fates” in Greek mythology, were the white-robed personifications of destiny.

The Greek word moira (μοῖρα) literally means a part or portion, and by extension one's portion in life or destiny. They controlled the metaphorical thread of life of every mortal from birth to death (and beyond). Even the gods feared the Moirae. Zeus also was subject to their power.

The three Moirae were:

The Roman equivalent of the Moirae were the Parcae, euphemistically the "sparing ones", or Fata; also equivalent to the Germanic Norns. It is difficult to separate the Moirae from the other Indo-European spinning fate goddesses known as the Norns in Norse mythology and the Baltic goddess Laima and her two sisters.

Despite their forbidding reputation, Moirae could be worshipped as goddesses. Brides in Athens offered them locks of hair and women swore by them. They may have originated as birth-goddesses and only later acquired their reputation as the agents of destiny.

Subscribe to Michael Colbruno's Mountain View Cemetery Bio Tour by Email
Posted by Michael at 8:01 AM