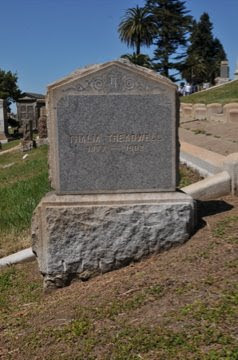 Thalia Treadwell was the first wife of Jimmie Swinerton, who was one of the most famous cartoonists in the world at the time. Swinerton was the protege of Will Hearst and worked as a caricaturist at his San Francisco Examiner newspaper. Swinerton married the young woman when she was just twenty years old. They soon moved to New York where the marriage turned tumultuous and they divorced shortly after their arrival. The famed cartoonist once said that his marriage “was not a long one, nor was it civil" and that it fell apart because of "booze and bickering." Swinerton went on to make a small fortune as an artist.

Thalia, however, took off for London, Paris and Berlin after the divorce. She studied art in Paris and left because of her health, which she attributed to the weather, In London she met a character actor of some note named Billy Abbington. Once again, her relationship soon turned sour and the couple separated. After a few failed attempts to make the relationship work, Thalia returned to New York. However, shortly after her arrival she fell ill from consumption and other health complications.

She moved back to California where she died shortly thereafter at her brother's home at age 25.

After her death some friends discovered her body in a cheap casket marked only with a piece of cardboard. They contacted her wealthy family who provided her with a proper burial. Maxwell McNutt, her sister Maud's second husband, always denied this story and claimed that the family intended on building a proper monument to Thalia's honor at Cypress Lawn Cemetery in Colma.

A few months after her death, her 25-year-old brother James committed suicide despite having just inherited $400,000. Tragically, her sister Maud also died young at age 35 from pneumonia. Maud had three failed marriages.

But the story doesn't end here. Her former lover Billy Abbington was visiting California from London and while attending a cocktail party in San Francisco he learned of Thalia's death. He traveled across the Bay to find her grave at Mountain View Cemetery and pay his final respects.

An article after her death described her life as something out of an Alexandre Dumas novel. In the historian Hubert Howe Bancroft's biographical sketch of her father, he describes Thalia as having an "artistic temperment," in what may have been a bit of an understatement.

Thalia Treadwell was the daughter of Mabel and James Parker Treadwell, a prominent attorney. Her other siblings were James Parker, Jr., Ivan, Parthenia and Cynthia (who died in infancy). The Treadwell's lived on ten acres near Golden Gate Park in San Francisco.

Hi Mike,
I am a descendant of Thalia Treadwell and have recently been looking into the Treadwell Family. I would be interested to hear what other information you have on her and the Treadwell family. My grandfather was Thalia's nephew. Look forward to hearing from you.

Just shaking my head reading this; married at 20, off to New York for bickering and drinking, and divorce...off to Paris, studying art but also sadly picking up TB either there or in the next stop in England where another unhappy marriage takes place which doesn't last long. Then back to the US to an early death at 25.
Does it get more sad than that?