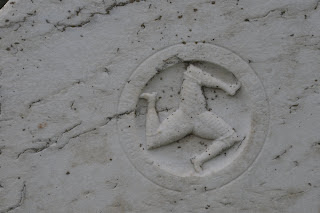 [Photo of gravestone triskelion by Michael Colbruno; Flag of Isle of Man]

The Manx triskelion is most commonly found on the flag of the Isle of Man. There is also a related Sicilian version with a face in the center of the symbol.

The Manx triskelion is one of the oldest continually used government symbols. It is a version of the sun symbol or swastika used by many ancient civilizations. Common in Scandinavian lands, it may well have been introduced to the Isle of Man when the Norse ruled the area prior to 1266. Its use is confirmed from the late 13th century by a medieval document and by the sword of state carried in ceremonies of the Tynwald Court, the Manx parliament. The symbol became the basis for the local flag after the Scottish earl of Moray, Sir Thomas Randolph, was made the ruler of Man in 1313.

Man fell under the rule of England in 1341. The island government flew the Union Jack from the 17th century to July 8, 1929, when the triskelion flag replaced it as a local symbol. There were many artistic variations on the design until the flag was standardized in 1966. A special version, incorporating a Union Jack in the upper hoist, is flown by ships registered in Man.
Posted by Michael at 7:44 PM