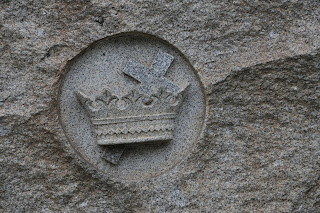 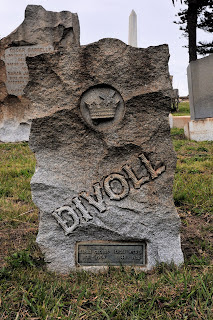 James George Divoll (1831-1904) owned the Big Bonanza Mine in Sonora along with Charles Clark and Joseph Bray. They bought the mine from a group of Chilean miners in 1851 and soon struck a massive pocket of gold. The day after the find they sent $160,000 of gold to the mint in San Francisco. Within a week, they had shipped $500,000 worth of gold.

Old mining legends in Sonora claim that Divoll stored his gold in the Star Flour Mill, which he built. The mill burned to the ground and it was believed that the fire was started to cover up a robbery.

According to Douglas Keister's "Stories in Stone," a crown with a cross "...is a Christian symbol of sovereignty with the Lord. When the crown is combined with a cross, the crown means victory and the cross means Christianity."
Posted by Michael at 1:40 PM