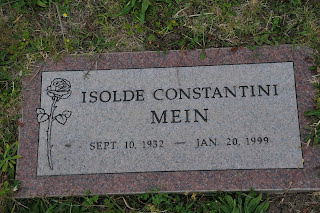 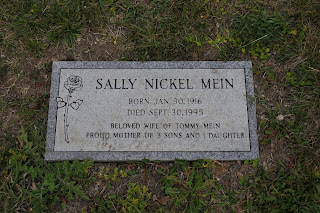 
Gardner Mein (1919-2012)
[Obituary from David Perlman, SFGate] Gardner W. Mein, a scion of San Francisco society whose reputation as a lighthearted boulevardier belied his dedication to preserving the city's historic sites, died Friday after a long illness. He was 93.

Mr. Mein was widely known as a socialite, but he was also a canny political tactician who campaigned successfully against high-rise buildings that threatened to obscure the San Francisco waterfront.

In 1970, for example, he and then-Supervisor Roger Boas successfully rallied the public to stop U.S. Steel from building a proposed a 550-foot-tall office building on the Embarcadero between the Bay Bridge and the Ferry Building.

"High-rises are like heroin," Mr. Mein argued at one public hearing. "Once you start you can't stop except by drastic means, and by then it's too late."

Several years earlier, Mayor George Christopher asked Mr. Mein to raise funds to save the Bernard Maybeck-designed Palace of Fine Arts in the Marina. Built in 1915, the structure was crumbling into ruin and slated for demolition.

Mr. Mein led a public campaign in 1957 that quickly raised $300,000, and then persuaded Walter S. Johnson, a San Francisco industrialist, to contribute another $2 million. With that, plus city funds, the Palace of Fine Arts was rebuilt, and it now houses the Exploratorium along with a 962-seat theater. He later led a successful campaign for city funds to have the building illuminated permanently at night and preserved as a historic monument.

In 1962, Mr. Mein was named president of the San Francisco City Planning Commission and served in that post for many years.

A member of a historic California family, Mr. Mein was president of the Clear Lake Water Co., a longtime family-owned firm, and vice president of another, the Calaveras Cement Co.

In 1978, he founded the Nob Hill Gazette, in which he chronicled the lives and philanthropic activities of affluent San Franciscans. He made the illustrated monthly magazine a successful venture and it continues today with a circulation of about 82,000.

In Lake Tahoe, where he maintained a beachfront home, he was president of the Tahoe City Chamber of Commerce and founded the North Lake Tahoe Historical Society. In 1965, he built the River Ranch Inn along the Truckee River at the entrance to the Alpine Meadows ski resort.

Gardner Williams Mein was born in New York City and educated at the Cate School in Carpinteria (Santa Barbara County) and UC Berkeley. He lived in Napa Valley in his later years.

William Wallace "Tommy" Mein (1873-1964)- Husband of Frances Williams Mein (1878-1967). After graduating from Cal, Tommy Mein went to South Africa to work with the Robinson Mines. He later founded the Calaveras Cement Company and Bishop Oil Company. In 1907, Frances married the Captain's son, Tommy Mein. Frances was the daughter of Gardner Williams, who along with Captain Thomas Mein pioneered hydraulic gold mining in California. Frances would probably appreciate this post, as she was an active member of the California Historical Society. Their son, Tommy Mein, Jr. (1910-1998) later took over the Calaveras Cement Company. They had another son, Gardner Williams Mein (who lives in Napa Valley), and two daughters, Dorothy Fay and Frances de Bretteville (1915-2007). In 1938, Frances married Charles de Bretteville, a native of San Francisco. Mr. de Bretteville was a leading businessman who was a nephew of Alma de Bretteville Spreckels. He became the president of the Spreckels Sugar Company, and later the CEO of the Bank of California.

Robert Menzie Mein (1875-1913) - The son of Captain Tommy Mein and Mary Mein, he was one of the most successful mining engineers in California. He was one of the first people to recognize the mining potential of South Africa. He also owned mines in Alaska and Nevada. Unfortunately, he caught pneumonia on a visit to Alaska and never recovered.

Isolde Constantini Mein (1932-1999) - Isolde was a German immigrant who worked as a cook for the Mein family. When she was 24, the Mein's 20-year-old son Billy fell in love with her and ran off to Reno to get married. His mother Sally Miller Nickel Mein was outraged and went to court to annul the marriage based on the fact that he was not 21. Despite her efforts, Billy and Isolde married legally two months later after he celebrated his 21st birthday. Sally Miller Nickel Mein (1916-1995) was the great-granddaughter of land and cattle baron Henry Miller [see Lux posting]. She was heiress to the substantial Miller fortune.

Robert Nickel "Nicky" Mein (1942-1996) - Another son of Sally Mein, Nicky Mein was a former schoolteacher and interior design consultant who died of AIDS. He volunteered with Meals on Wheels and helped found Project Open Hand.

I think I found parts of my family. My grandfather was Peter Constantini, Isoldes brother from Germany Andernach. I would love to trace my family tree in America. Where do I go from here?

my name is Roxanne Mein i am Isoldes' granddaughter. My father is Roger Mein Her second son. We live in California and there are a lot of Constantinis here. we would love to hear more about you.

can you tell me if who lived at the Mein's estate in Woodside, off canada Rd?

I think Sally Mein was one of the most graceful women I have ever met. I am currently including her in one of my non-fiction short stories regarding the night she threw a 40th Birthday party for her son, Tommy, in Woodside. A charming guest was Charlie McCabe, at the time with the S.F. Chronicle. Sally graciously placed my card at the table next to his because she knew we enjoyed discussing the writer Henry James. Charlie was quite a character. No one could keep up with his drinking.