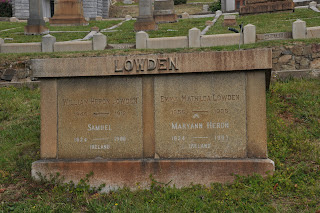 At a time when fires were a common occurrence in San Francisco and Oakland, William Lowden (1848-1912) became a pioneer in the fire insurance business. Lowden moved to Truckee, California from Belfast, Ireland as a young man where he worked as a merchant while "dabbling" in fire insurance.
He moved to San Francisco after a few years and accepted a job with the North British and Mercantile Insurance Company, where he worked his way up to manager. In 1895 he was appointed a manager of the Norwich Union Fire Insurance Society, a job he held until his death. During this time he served as President of the Fire Underwriters' Association of the Pacific.
Lowden took up a number of hobbies with great ardor, becoming an amateur photographer of some note, a competitive "high wheel" bicyclist, a competitive rifleman, trout fisherman and competitive yachtsman (with Mountain View denizen William Letts Oliver).
Posted by Michael at 10:18 PM

Where did you find your information on William Heron Lowden?

Chris, Most of my information on Lowden came from old newspaper archives.

Thanks Michael. William Heron Lowden was my great, great grandfather - my son is also named after him. We have photos of him & his wife Emma Matilda in the family archives if you're interested. We currently live in Berkeley

Thanks for writing this.

Thanks again for posting this information. William was also a member of the exclusive Bohemian Club of San Francisco. Here is a picture: http://content.cdlib.org/ark:/13030/ft4s2005vp/

If Chris sent you any contact information, can you please send him my email as we have lost touch with later generation of that family. Here is my email gregnmeg @ gmail.com (without the spaces).

Sorry. I realized I was mistaken when I wrote this before.