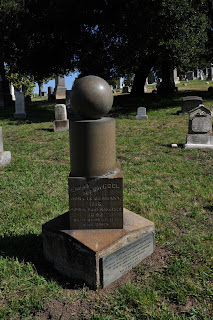 Emma Marwedel was born in Munden, Germany to a family of social standing. However, her parents died when she as young and she was left with limited means to support herself. She became an ardent feminist and in 1865 founded the first women’s right organization in Germany. She became committed to training women in the industrial arts.

She trained at the famed Froebel School in Hamburg, where the benefits of early childhood education were championed. In 1870, American feminist Elizabeth Palmer Peabody brought Marwedel to New York to found kindergartens and prepare women to become skilled industrial workers. From 1872-1876 she set up schools in Washington D.C. In 1876, famed suffragette Caroline Severance brought Marwedel to Los Angeles where she founded the California Model Kindergarten and the Pacific Model Training School for Kindergartners, both funded by Severance.


Frustrated with her work in Los Angeles, Emma Marwedel moved to Oakland and then San Francisco where she helped found the San Francisco Kindergarten Society, which established the first free kindergarten on the West Coast. She was a founding member of the California Kindergarten Union and she opened an evening vocational training school for boys.

She was a well-known lecturer, author and advocate for educational reform. She trained many teachers who went on to become reformers in the kindergarten movement and her work helped establish kindergartens across the United States.

Marwedel was honored at the Chicago World’s Fair in 1892 with a large oil portrait in the California Room. She died a year later at the German Hospital in San Francisco. Her gravestone reads, “She Loved Little Children.”

Hi Michael, I met you during the 10-11-08 cemetery walk, & sure enough, I had already discovered your blog & had it bookmarked :-) I hope Emma is one of the stops on the interesting woman's tour, can't remember when it's scheduled, but this is one interesting lady. I loved kindergarten!

I was wondering if Emma Marwedel's tombstone is representative of Froebel's gifts?