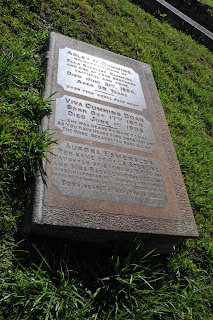 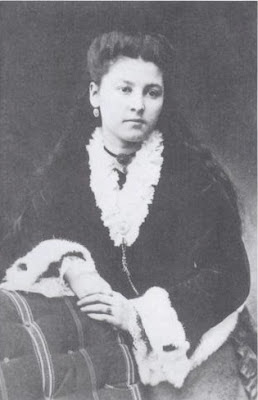 Ella Sterling Cummins Mighels (1853-1934) was a prolific historian who preserved much of the early literary history of California. Her goal was to be the “link between the Gold Rush days and the twentieth century’s brave new world.”

Mighels was born in 1853 outside of Sacramento, California near a gold rush mining camp called Mormon Island. Her father, Sterling Benjamin Franklin Clark, came to California from Rutland, Vermont in the Gold Rush of 1849. His mining efforts were successful enough to allow him to purchase property holdings around Sacramento, where he eventually became a judge. He died seven months before Ella was born.

Ella’s mother went on to open the first school in the Sacramento area and remarried a gold miner and Nevada legislator named Dudley Haskell.

At the age of ten, Ella had a fairy tale published in the Aurora Union, the newspaper in the Nevada town where they were living. From that moment on, she considered herself a writer. She continued to write fairytales and children’s stories her entire life. Later in life she adopted the pen name Aurora Esmerelda.

In 1872, Ella married Adley Cummins in Sacramento [see adjoining bio]. The had one child together, Genevieve, who was born on October 17, 1875. The family moved around considerably between the birth of their daughter and 1889, all the while maintaining a home in San Francisco. During this time Ella published her novel Little Mountain Princess, the first novel by a native Californian.

In 1889, Adley Cummins died at the tender age of 39 and Ella immersed herself in writing about the California pioneers. She portrayed them as neither good nor bad, but as human and hard-working.

In 1913, Ella Mighels founded the California Literary Society. In 1919, the California State Legislature named her the “first historian of literary California." Note that her gravestone is a giant book.

Subscribe to Michael Colbruno's Mountain View Cemetery Bio Tour by Email
Posted by Michael at 6:25 AM

Does the gravestone give Ella's death date? (I found the photo tricky to read.) Do you know of any local records that confirm it? I ask because find-a-grave lists her death date as December 12, 1954, but doesn't show a picture of her gravesite. Their date conflicts with other sources like her papers, which give her death date as December 10, 1934. celebration.women@gmail.com Any help is appreciated! Thanks, Mary