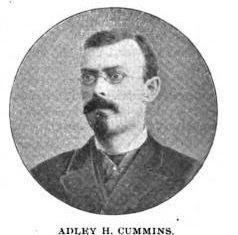 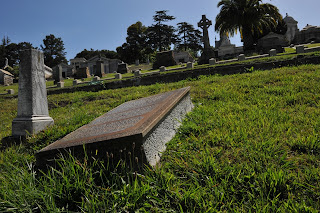 Adley Cummins (1850-1889) was a scholar, philologist, attorney and businessman. A native of Chester County, Pennsylvania, he was educated at Northwestern University. He was married to Ella Cummins Mighels [see following post].

He came to California in 1869 with General Towne of the Southern Pacific Railroad at the age of 19. He continued his studies in California and by the age of 30 he mastered the grammar and construction of 60 languages and dialects. In order to master his linguistic studies, Cummins ordered books from around the world. For many years his book “Grammar of the Friesic Language” was considered the standard in the field. He was an expert on languages that literally only a few people could speak, like Zend and Avesta.

He was a frequent lecturer at the Academy of Sciences on such topics as, “The Semitic Race,” “History of Liberty,” and “Alphabets and Numerals.”

Ambrose Bierce once commented about him, “I remember Mr. Cummins as one whose work was thought too good and scholarly for the public, to whom I was employed to throw smoked pearls. I remember, too, that he impressed me rather oddly as being out of place in San Francisco.”

Cummins was known to relax by reading Sanskrit texts like the Mahabarata, Sakuntala and Vedas.

Many of his thoughts were extremely progressive, including claims that many Biblical stories were based on ancient myths, such as the story of Cain and Abel, which he tied to Chaldaic mythology.

In his article, “The Corrupter – Wealth,” he wrote:

It is wealth that kills a nation; not as wealth, but because of the inequality of its distribution,

No nation has ever yet gone to decay because it was poor.

This is a matter which concerns us deeply as Americans – not to prevent the increase of wealth, but to remedy and prevent the monstrous, the gigantic inequality of its distribution now permitted in society.

It was frequently stated that he was of weak health and he died at aged 39.

Enormous credit must be given to Mountain View Cemetery docent Stafford Buckley who spotted this interesting "big book" gravestone and began the research.

Subscribe to Michael Colbruno's Mountain View Cemetery Bio Tour by Email
Posted by Michael at 6:34 AM