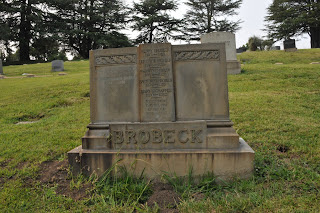 William Irvin Brobeck was a prominent attorney, deputy city attorney and counsel to the Key System.

In 1903, after eleven years as a deputy in the San Francisco City Attorney’s office, Brobeck was offered the Democratic Party nomination to run for City Attorney, but declined. He became the chief deputy to City Attorney Percy V. Long and handled many of the major issues in the office. In declining the nomination, he expressed interest in going to the private sector, but first he wanted to wrap up some major tax and railroad cases that involved the city.

In 1907, Brobeck was indicted along with San Francisco Mayor Eugene Schmitz and Abraham Ruef for bribing Supervisors to vote for a trolley franchise to the Parkside Transit Company. With the assistance of Mayor Schmitz, the political boss Ruef arranged for the bribery of the Board of Supervisors by public utility companies and other powerful business interests including United Railroad. The prosecutor in the case was Francis J. Heney, who was succeeded by Hiram W. Johnson, when Heney was shot in the courtroom. The case helped launch Johnson's political career. Only Ruef was convicted of bribery in 1908 and sentenced to a 14-year prison term.

Around 1910, Brobeck was one of the founders of the Morrison, Dunne & Brobeck law firm in San Francisco (later Brobeck, Phleger & Harrison). At the time, the firm represented some of the most prominent families and businesses in San Francisco, including American Trust Company, Moore Shipbuilding Company, St. Francis Hotel Company, and the Crocker, Matson, and Spreckel families.

He served on the Board of Trustees at Mills College.

Brobeck died of heart failure on a boat while on an Alaskan vacation near Sitka with his wife and son.

Subscribe to Michael Colbruno's Mountain View Cemetery Bio Tour by Email
Posted by Michael at 8:35 AM

Very interesting! Ruef and Schmitz were basically railroaded in that case, part of the fallout from the 1906 quake. The damning details appear in Philip Fradkin's "The Great Earthquake and Firestorms of 1906."

I found this site using [url=http://google.com]google.com[/url] And i want to thank you for your work. You have done really very good site. Great work, great site! Thank you!

Who knows where to download XRumer 5.0 Palladium?
Help, please. All recommend this program to effectively advertise on the Internet, this is the best program!