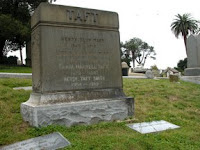 The Tafts had three children, Joshua Maxwell, born March 11, 1878, Clara Maxwell, April 21, 1879, and Dorothy Elizabeth, December 18, 1890, who all lived in Oakland. Clara studied at Anna Head School (see blog posting) and became a Carmelite after studying at Columbia University. Following in the footsteps of her relative William Cullen Bryant, she published a book of poetry called “Give Me the Stars.”
Posted by Michael at 8:18 AM