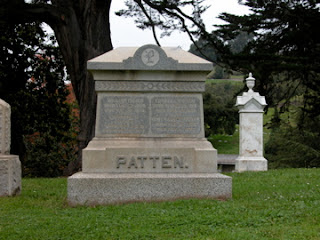 The Pattens proved themselves to be honorable men, unlike Edson Adams, A.J. Moon and Horace Carpenter, who squatted on the Peralta land, stole timber and killed cattle. Adams has a prominent crypt at Mountain View Cemetery.
Posted by Michael at 9:25 AM