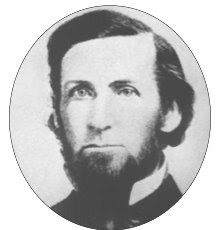 Isaac Brayton was a minister who came to California from New York in 1850, and shortly became the second pastor at the First Presbyterian Church of San Jose, a post he held until 1852. In true ecumenical spirit, he served in 1855 as the second minister at San Francisco’s First Congregational Church.

Rev. Brayton became an enthusiastic supporter of Rev. Henry Durant’s new Contra Costa Academy opened in 1853. The Academy soon became the College School, and Rev. Brayton attempted to raise funds for the school on a trip east in 1853-54. Brayton was disappointed by the virtual lack of response from would-be eastern donors. Their usual response was, “Everyone in California has so much money from the gold mines, why would they need our contributions?”

The school struggled on at its four-block Oakland campus, always short of money, but finally they decided to open a college on the same campus, the College of California. Durant left his job as principal of the school to teach Greek and Literature at the college, and Brayton succeeded him as school principal, also serving as a part-time college teacher of English, Rhetoric, and Letters.

In 1863-64 Rev. Brayton came into some money when he sold 200 acres to the trustees of Oakland’s newly formed Mountain View Cemetery. This windfall enabled him to buy half of the College of California’s Oakland campus – the portion that held the College School, and to purchase the school’s buildings. He and his wife continued to operate the school which by this time had some 250 students from all over the state.
In the late 1860’s the state finally decided to establish a university, and the College of California was folded in to the new institution.

Isaac Brayton died of tuberculosis in 1869, and is buried on his former property, now Mountain View. Shortly after his death, the new University of California worked out a deal with Mrs. Brayton to trade some of the University’s land above their new Berkeley campus for her land on the Oakland campus. The land Mrs. Brayton received was some 82 acres uphill from Prospect Avenue in Berkeley and is today occupied by hillside homes in the area of Panoramic Way.

Subscribe to Michael Colbruno's Mountain View Cemetery Bio Tour by Email
Posted by Michael at 11:30 AM