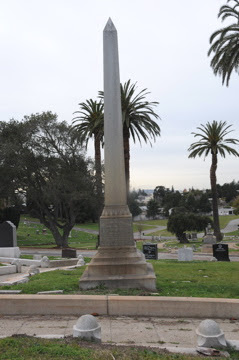 This beautiful monument was erected by the San Francisco Savings Union in honor of bank teller William Herrick. The 33-year-old Herrick was killed when noted desperato Frederick Bonnemant (a.k.a. William Fredericks), handed the cashier a note demanding money or he'd blow up the building. When Herrick handed the note back to the would-be robber both men reached for their guns. Herrick missed Bonnemant, but Bonnemant hit Herrick right above his heart, killing him instantly.

An angry crowd chased down Bonnemant and he was captured. Bonnemant had a criminal past, having robbed a train and killing the sheriff of Nevada County.
Posted by Michael at 5:07 PM