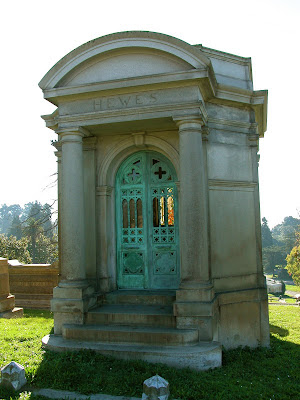 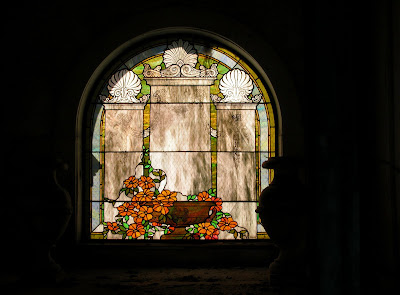 David Hewes is probably best known for donating the golden spike that linked the transcontinental railroad tracks in May of 1869 at Promontory Summit, Utah. His long-time friends and associates, the Big Four (Crocker, Hopkins, Huntington and Stanford), built the Central Pacific Railroad that drove east to meet the Union Pacific pushing west. He was the brother-in-law of Leland Stanford.

Crocker and another business partner, David Colton, are also buried at Mountain View. Hewes had contracted to level off hill tops, sand ridges, and dunes of San Francisco. He started with a shovel, wheelbarrow, and a Chinese laborer. Within a few years his Steam Paddy Company purchased steam shovels for the work and went on to built the first steam locomotive on the Pacific Coast that hauled carloads of dirt to the eastern edge of the city where it deposited as landfill undoubtedly onto the rotting "skeletons" of Gold Rush schooners. The proposal to join the Big Four must have tempted Hewes but, he was still smarting from recent loses. Hewes had joined the Gold Rush, but not to pan for gold. He had shipped collapsible metal buildings West to Sacramento, sold them to gain a foothold, then became a successful merchant, but he lost nearly everything in the Sacramento fires and floods of 1852 and 1853. Still in the process of recovering, Hewes was unwilling to take the financial risk and turned his friends down. When the transcontinental railroad neared completion, however, Hewes, the tireless and talented promoter, recognized what his famous friends did not — the need for ceremony and pageantry to celebrate North America’s transcontinental railroad. He transformed an event, held in a remote and desolate part of the country, into a national celebration that was shared, simultaneously, from coast-to-coast via the telegraph system. By the time Hewes was 84 years old, he was no stranger to disaster. Death had taken two wives, a prosperous business had gone up in smoke, blight had decimated his vineyards, and a land development project had failed. But none was quite as sudden or spectacular as the San Francisco earthquake of 1906 that leveled his three-story office building at 997 Market Street. Age, however, had not quenched the spirit that brought David Hewes from poverty to prosperity. He wired his nephew: "Burned today; build tomorrow," then planned a 15-story building that was completed two years later at a cost of nearly $1 million. Hewes spent his time in both San Francisco and Anapuma in Southern California. He organized the David Hewes Orange and Lemon Association, built a packing spur and at age 90 and still drove his horse and buggy around Los Angeles and San Francisco.