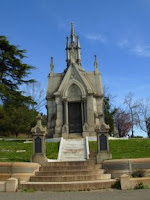 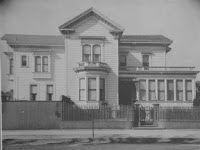 He and his family rest in and around a grand Gothic Revival aediculum -- one of two Fulgenzio Seregni-designed aedicula in the cemetery -- right next door to Charles Crocker on Mountain View Cemetery's Millionaire's Row.
Posted by Michael at 9:01 PM