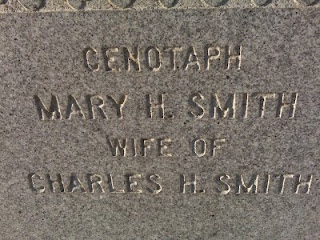 [Photo of cenotaph at Mountain View Cemetery by Michael Colbruno]

A cenotaph is a tomb or a monument erected in honor of a person or group of persons whose remains are elsewhere. It can also be the initial tomb for a person who has since been interred elsewhere. The word derives from the Greek κενοτάϕιον (kenos, one meaning being "empty", and taphos, "tomb"). Although the vast majority of cenotaphs are erected in honor of individuals, many of the best-known cenotaphs are instead dedicated to the memories of groups of individuals, such as the war dead of one country or empire.

Although most notable cenotaphs commemorate notable individuals buried elsewhere, many cenotaphs pay tribute to people whose remains have never been located. One of the most striking cenotaphs to be found in Arlington National Cemetery is that of RMS Titanic victim Major Archibald Butt, aide to President William Taft, whose body was not recovered after the sinking.

I don't know the history behind Mary Smith's cenotaph at Mountain View.