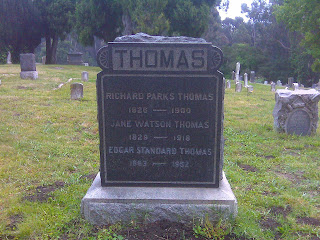 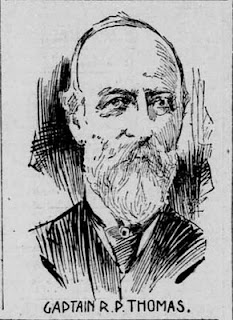 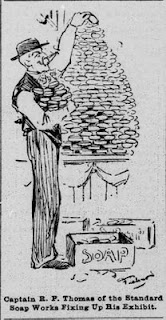 Richard Parks Thomas was born in Berne, Albany County, New York. In his early years he was apprenticed to a merchant in Ithaca but abandoned that job and left for New York. In 1846, he entered the U.S. Navy and served for two and a half years on a man-of-war in the Mediterranean.

Thomas eventually moved to Syracuse, N.Y., where he established a small soap factory. After his factory was destroyed by fire he moved to Pennsylvania, where he attempted to start a cavalry, only to be told by the Secretary of War that there was no need. He eventually ended up convincing a wealthy man to provide horses for a cavalry, which became the Civil War’s first voluntary cavalry.

Seeking his fortune in California, the war veteran joined Cogswell’s Standard Soap factory in San Francisco. He wasted no time in becoming a partner, and soon acquired the business, making it grow through further acquisitions. Wanting to consolidate his operations in a single location, Thomas chose the West Berkeley waterfront, where both water and transportation were within easy reach. Constructed in 1875, the Standard Soap Works occupied a full block on Third Street between Addison and Allston Way (the site is now occupied by the Takara Sake Company).

Until the rail tracks were built along Third Street, transporting freight by water was the only economic option. Thomas got into the transportation business by acquiring the ferry Mare Island, which not only carried his goods and those of other firms but had a virtual monopoly on the Berkeley-San Francisco route for many years. This led to a fierce battle with other ferry companies, which escalated into a “ferry war” before an agreement was reached whereby all goods would be shipped at the same rate.

Standard Soap made Thomas rich, and by the mid-1880s he was casting about for new ventures. In October 1886, he founded the California National Bank of San Francisco, located in the Palace Hotel building on Market Street.

Within two years, his California National Bank of San Francisco went into receivership, and one of its stockholders, John Chetwood, Jr., sued the three members of the bank’s executive committee, seeking to recover the bank’s losses from them.

In December 1892, the plaintiff won a preliminary decision with Thomas owing $139.419. Thomas wasn’t about to hand over the money and put up quite a fight against Chetwood, including hiding his liquid assets. Chetwood then went after Thomas’ 32-acre North Berkeley estate, La Loma Park, which was valued at $40,000. The California Supreme Court eventually ruled in Thomas’ favor and Chetwood unsuccessfully appealed to the US Supreme Court.

In March 1897, Captain Thomas offered to deed his estate to Berkeley, to be used as a public park. The city did not jump at the offer and he died of a stroke on May 28, 1900 leaving the land to his wife, who quickly subdivided the land and sold it to Easton & Eldridge.

Among the first nine lot purchasers was Professor Andrew C. Lawson, the famed geologist. He would wait seven years to build his La Loma Avenue house, designed by Bernard Maybeck. The architect himself would not buy land in La Loma Park until 1905 or 1906, but once he began building there, he created the largest concentration of Maybeck houses to be found anywhere.

You can read Daniella Thompson’s entire 3-part series on Thomas and Maybeck at http://berkeleyheritage.com/eastbay_then-now/rp_thomas.html

Subscribe to Michael Colbruno's Mountain View Cemetery Bio Tour by Email
Posted by Michael at 7:18 AM