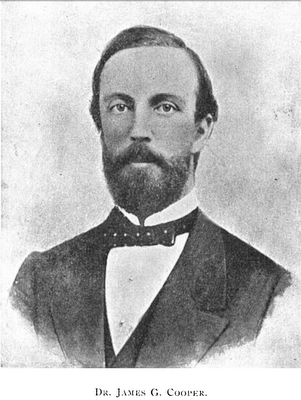 [From Cal Central by Frank Perry]

James G. Cooper was born June 19, 1830, in New York City and was no doubt influenced early in life by his father, William Cooper. His father was a skilled naturalist and founder of the Lyceum of Natural History of New York. The elder Cooper was one of the first Americans to publish articles on vertebrate paleontology, and the Cooper's Hawk was named in his honor. Unfortunately, James's mother, Mary Wilson Cooper, died when he was about five. In 1837 the family moved to a farm in New Jersey where young James grew up hunting, fishing, and collecting shells, birds' nests, reptiles, and other natural history specimens. He kept squirrels, a raccoon, and an opossum as pets.

There were few jobs in the natural sciences in those days so, typical of many naturalists at that time, James Cooper pursued and received medical degree. He graduated from the College of Physicians and Surgeons in New York City in 1851. The medical training also gave him a general background in science and would enable him to, if necessary, earn a living as a physician while pursuing his nature studies on the side.

Over the next decade, however, he worked at a series of government jobs where he used both skills. In 1852 Cooper learned of plans for a series of government surveys and explorations of the West. So he wrote to Spencer Fullerton Baird, Assistant Secretary of the Smithsonian, who helped find scientists for the expeditions. Baird liked Cooper's enthusiasm. It would indeed be strange, Baird wrote back, "if the son of one so intimately connected with the progress of American science as your father should not have some of his tendencies."

The following year Cooper was assigned the job of surgeon and naturalist on a government expedition in search of a transcontinental railroad route through the Northwest. Young Cooper, thrilled at the opportunity to explore new lands, set off on April 28th, 1853, on a steamer for the Washington Territory. They traveled by way of the Isthmus of Panama and arrived at Fort Vancouver on the Columbia River in mid June. The survey was to be made by the Army Corps of Topographical Engineers, under the leadership of Captain George B. McClellan (later to gain fame during the Civil War). The government wanted to know not only about topography, but also about fauna, flora, and geological resources. Wrote Baird:

"The general principles to be observed in making collections of natural history in a new country or one previously unexplored, is to collect everything which may present itself, from time to time, subject to the convenience or practicality of transportation. The number of specimens secured will, of course, depend upon the dimensions, and the variety of form or condition caused by the different features of age, sex, or season. ...In collecting specimens of any kind, it will be important to fix, with the utmost precision, the localities where found. ...It will not be possible to collect minerals, fossils, and geological specimens in very great quantity or dimensions...."


The team set out in mid July to explore the Cascade Range, with hopes of finding a pass over the mountains. Over the next ten months, Cooper took notes and collected birds, plants, and other specimens for shipment back to the Smithsonian. He was paid a salary of $70 per month. Even after the expedition disbanded, Cooper remained in Washington Territory, exploring the region between the Columbia River and Puget Sound.

Over the next few years Cooper participated in several other government explorations including the Wagon Road Expedition of 1857 and the Military Expedition to the West in 1860. He also hiked through New England and traveled to Florida (partly with his own funds) in search of specimens for museums.


When not traveling, he kept busy at the Smithsonian, writing up the results of his investigations. In Washington he worked with other important scientists, and made connections with high ranking military and political figures, including President Buchanan and Ulysses S. Grant. There were other amenities too: "Saturday, P.M. I went on an excursion to Arlington and had a pleasant time -- dined at Colonel [Robert E.] Lee's with a large party, many of them charming damsels, and walked home with two of the beautifullest girls in Washington."

But Cooper became depressed at the amount of time it took to get his reports published and soon longed for the wilds.
"I wish I could find pleasure in any of the common ways, but boating, theatre, opera, and all other such things have not charm for me, and I fear if I do not soon get away from civilized life into the wild woods of Florida or most anywhere else I shall get sick..."

In 1860, Cooper returned to the West Coast, eventually landing a job with the Geological Survey of California, led by Professor Josiah D. Whitney. The state legislature had appointed Whitney State Geologist and directed him: ³With aid of such assistants as he may appoint, to make an accurate and complete Geological Survey of the State, and to furnish, in his Report of the same, proper maps and diagrams thereof, with a full and scientific description of its rocks, fossils, soils, and minerals, and of its botanical and zoological productions, together with specimens of the same.² Cooper worked on and off for the survey, which suffered from sporadic funding, over the next ten years. He explored southern California, the Farallons and Channel Islands, the Sierra, and the Santa Cruz Mountains, among others.

Cooper visited Monterey in 1861, where he hired a boat to help in dredge for marine life in Carmel Bay. He first visited Santa Cruz as in 1864. Here, he hoped to find people with a love "...of simple pleasures and rural life..." He predicted that someday the town would become a second Newport (referring to Newport, Rhode Island). The place apparently appealed to him. In early 1866, after marrying his wife Rosa, they moved to Santa Cruz, and he set up a medical practice. In September he wrote to Baird:

"I am not making expenses yet at practice, but hope to make a living at it after a while. It however keeps me pretty close [to] my office and prevents my collecting much, as I have to be on hand in case of accident and not let them go to one of the six other doctors in town."


Another letter from Santa Cruz, to British malachologist Philip Carpenter, reveals Cooper's frustrations trying to carry out his scientific work:

"As to the pay, I care little, for it is not enough in this country to be worth the trouble of working for; in fact, I got only half paid for my report on the four classes [of] vertebrates and Mollusca. ...I have been following your example and getting married, and now have to pay closer attention to my profession, which in this country will not allow me to study the natural sciences very deeply, as the practical Americans always consider a man either deranged or neglectful of his business if he is known to be a naturalist."


Cooper, his wife, and newborn son left Santa Cruz in 1867 and eventually settled in Hayward where he finally managed to balance the practice of medicine with the study of natural history.

Cooper was a Renaissance man of natural science back at a time when it was still possible to hold such a title. He published on an incredible variety of topics: medicinal plants, forest trees, birds, mammals, reptiles, land snails, freshwater clams, coal distribution, marine mollusks, fishes, and fossils. In all, he wrote over 150 papers. With regard to paleontology, his greatest contribution was assembling a catalog of fossils collected by the California Geological Survey, published in 1888. He also wrote a "Catalogue of Californian Fossils," published in 1894. In it he described several new species of fossil mollusks. He published separate reports on the Pliocene, Miocene, and Eocene paleogeography in California. In his 1874 paper "California in the Miocene Epoch," he correctly concluded that much of the Coast Ranges south of San Francisco were under water during that time period.

"He was one of the original group of young naturalists which gathered around Professor Baird in the early days of the [Smithsonian] Institution...and whose names are classic in the annals of zoology in this country. ... Dr. Cooper ... for years ... was dependent upon his medical practice for support. But in spite of these handicaps his work on the Pacific coast has been of primary importance, and by his death passes away the last member of a group of men to whom American zoology is permanently indebted."


Several species of marine mollusks, as well as the Cooper Ornithological Club, were named in his honor.

He is buried in the family lot of Rev. Samuel Taggart Wells, a founder of Mountain View Cemetery. He married Rosa Wells in 1866,