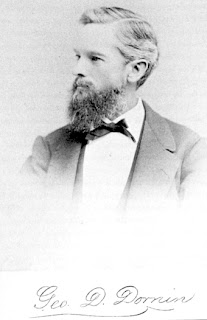 In 1852, he moved to Nevada City arriving via boat and stage coach.  Upon arriving in the gold fields he worked a number of odd jobs, including launderer, sign painter, baker and wallpaper hanger. That same year, he also took one of the first known pictures of Nevada City. He settled down for 18 years and worked as a merchant in Nevada City and San Juan, where he also got married and raised his children
In 1856, he helped form a Rocky Mountain Club, a Republican club set up during the Presidential campaign of John C. Fremont. The club was jeered with taunts of “Negro Worshipper” and “Black Republicans” because of their opposition to slavery.  In the 1860s, Dornin served four years in the State Legislature while simultaneously working as an express agent, telegraph operator, bookkeeper and stage line operator.
In 1867, he began work as an insurance agent, at which he became highly successful. By 1873, he had already become a vice-president at Fireman’s Fund Insurance Company. A 1906 article in the Oakland Tribune announced the resignation of Dornin from the National Fire Insurance Company when he disagreed with the company’s method of discounting claims from the 1906 earthquake and fire in San Francisco.
Dornin’s grandson was John D. Eldredge, who had a fairly successful career as a supporting actor on television and on stage.
George Dornin’s obituary aptly described him as “the oldest insurance man in the State, and a pioneer of ’49.”
[Original bio by Michael Colbruno, based on "Thirty Years Ago" and Oakland Tribune articles]
Posted by Michael at 6:10 PM

As always, I enjoy receiving your new postings. your attention to detail is incredible! The Library of Congress should appoint you the Historian of the Year!
Thanks so much for all your hard work.