Grant D. Miller was a well-known undertaker in Oakland, where a funeral home still bears his name. He was elected the Alameda County Coroner in 1914,  narrowly defeating incumbent Dr. Charles Tisdale. Miller served for 24 years until his voluntary retirement.

He was born in Amador County, California on November 24, 1863 to David and Julia (Hinkson) Miller.  In 1879, he moved to San Francisco, where he attended the Pacific Business College. After graduating, he was hired as clerk by Wells Fargo where he worked for two years. He moved to Mariposa, California in 1882 and worked as the secretary of the Compromise Mining Company for two years, at which time he rejoined his father in worked on the family farm.

Just before the turn of the 20th century he arrived in Oakland and opened his funeral home.  Besides his service as the Alameda County Coroner, Miller was instrumental in founding the East Bay Municipal Utility District (EMBUD) in 1923 and served on its board until 1943, when he resigned because of poor health. He was also a founder of the Oakland Community Chest and the Eastbay Safety Council.

He requested a simple funeral and that his pallbearers were all past and present employees of his mortuary.

The original mortuary was located at 2372 East 14th Street and remained there until 1978. It is currently called the Grant Miller-John Cox Mortuary and is located at 2850 Telegraph Avenue in Oakland.

Above is a picture of the current mortuary as it appeared when it was built 1896 and  as it appeared in 2009. The building was redesigned in 1931 by architects Chester Miller and Carl Warnecke. Note the four windows that can be seen in both pictures.
Posted by Michael at 3:02 PM No comments: 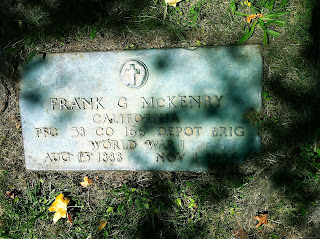 Lot 67, Plot 137
Frank “Limb” McKenry was a pitcher for the Cincinnati Reds in 1915 and 1916 where he compiled a 6-6 record with a 3.10 ERA. Due to his 6’ 4”, 205-pound physique, he was also known as “Big Pete.”
In 1916 he was called to service in the California National Guard and shortly thereafter  retired to run his fruit farm in California’s Central Valley.
In 1934, McKenry and his wife divorced and he began struggling with depression. As his rheumatoid arthritis grew progressively worse he decided to end his life on the evening of November 1, 1956. He placed a shotgun in his mouth and fired. He left no note.
Posted by Michael at 10:09 PM No comments:


Outdoor Garden Mausoleum, Crypt 11, Tier 2
Bill Branzel was an Oakland native who attended Fremont High School. He left school when he was 16 years old to play baseball for the Mission Club of the Pacific Coast League in San Francisco.
In 1931, at the age of 20, he joined the Pittsburgh Pirates organization and beat out full-time catcher Fred Hoffman for the starting job. In 1934, he was purchased by the Cleveland Indians from Kansas City and eventually became the first string catcher when Frankie Pytlak left because of illness. He ended up playing two seasons for Cleveland before retiring.

Known for his quick wit and slow feet, he made it to the majors based on his defensive skills, not his offensive prowess. He only hit .198 in his three major league seasons.
After his career ended he managed in the minor leagues before becoming a scout for the Los Angeles Dodgers. One of his major recruits was Earl Robinson, the two sport star of the California Golden Bears. Robinson ended up signing a $75,000 bonus with the Dodgers, a record at the time for a black player.
His son Gary also played baseball in college and the minor leagues.
Posted by Michael at 9:02 PM No comments: