[Photo by Michael Colbruno; picture of Hannah Jayne Adams from the Oakland Tribune]

Edson Adams (1824 - 1888) was born in Fairfield County, Connecticut and sailed for San Francisco in January, 1849. He arrived in July and headed straight for the mines. He spent several months in the gold fields and returned to San Francisco in March of 1850.

Adams was soon to become one of the richest men in the Bay Area. His success was in no small measure the immediate result of his affiliation with two ex-miners and attorneys, Horace Carpentier and Andrew Moon. The three me squatted, plotted, and incorporated the town of Oakland on land owned by the Peralta family, part of a Spanish land grant.

After an official dispute over the land, a compromise was reached, primarily engineered by Carpentier, by which the three obtained a lease from Peralta. Problems arose when Adams, Moon and Carpentier began selling portions of the “leased” land, and by late 1851 a surveyor had laid out the beginnings of the town of Oakland. Eventually, the courts ruled in favor of the Peraltas, but by then, it was too late, as the land had long before been sold and developed. 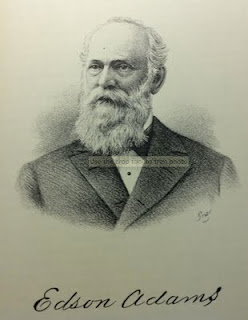 Adams first settled in a shack at the foot of Broadway (Main Street, then). The area he and his partners leased from Peralta ran from the bay to 14th Street and from Market Street to Lake Merritt. Oakland was incorporated as a town in 1852, and as a city in 1854. After a modest start, the new city became a popular residential community, particularly after Adams encouraged the development of ferry service to San Francisco. This was difficult because of the need to modify the natural sand bar at the estuary’s entrance, but eventually the establishment of ferry service allowed the burgeoning town to grow. In addition to pushing for ferries, Adams was a force in the setting aside of land for parks.

Edson Adams married Hannah Jayne, Oakland’s first school teacher, who had arrived in Oakland via mule across the Isthmus of Panama. Her schoolhouse was at the corner of Fifth & Clay and cost $1,000 to construct.

The Edson home, “The Place,” was located at Adams Point near the foot of Vernon Street. Their property at “Adams Point” totaled some 400 acres which they gradually sold off.

When Adams died in 1888, Adams Point was still largely undeveloped, although later many mansions dotted the area. It was after the 1906 earthquake that Adams’ descendants were moved to dispose of most of the family’s holdings in the area in response to the rapidly rising prices commanded by the demand of many San Francisco families relocating to the East Bay.